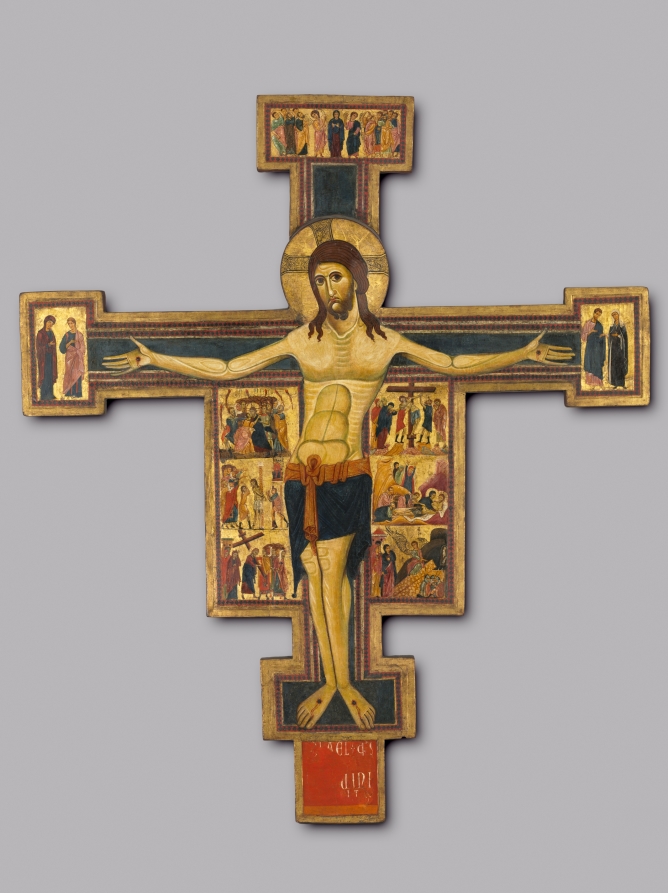 Crucifix with Scenes of the Passion

Oggetto: Painting
Large painted crucifixes dating from the 1100s and 1200s are among the earliest surviving Italian panel paintings. Large crosses, like this beautiful example, were typically suspended high above an altar in the main apse of Italian churches. Smaller crosses were placed on or just above altars in small side chapels. Such crosses served as the visual focus for devotion and symbolized the Eucharistic sacrament performed by the priest on the altar below. This crucifix shows Christ alive on the cross as the triumphant savior of mankind. Smaller images on the "apron" represent images of Christ's Passion (to the left) and his death and Resurrection (to the right). On the far left terminal appear the mourning Virgin and Saint John the Evangelist, while on the right the viewer is shown Saint James Major and Saint Bona, patroness of the city of Pisa. The concluding event, the Ascension of Christ, once appeared on the upper terminal, just above the Virgin and Apostles. The figure of Christ is painted in a severe and hieratic style suggestive of medieval Pisa's artistic and commercial links with the Byzantine East. The appearance of Saint Bona on this cross may suggest that it was made for the Church of S. Martino in Pisa, where Franciscan nuns tended the holy woman's relics.
Fonte: Crucifix with Scenes of the Passion, c. 1230-1240. Italy, Pisa, 13th century. Tempera with gold on panel; framed: 186.6 x 160.7 x 12.7 cm (73 7/16 x 63 1/4 x 5 in.); unframed: 185 x 160 x 10.2 cm (72 13/16 x 63 x 4 in.). The Cleveland Museum of Art, Leonard C. Hanna, Jr. Fund 1995.5