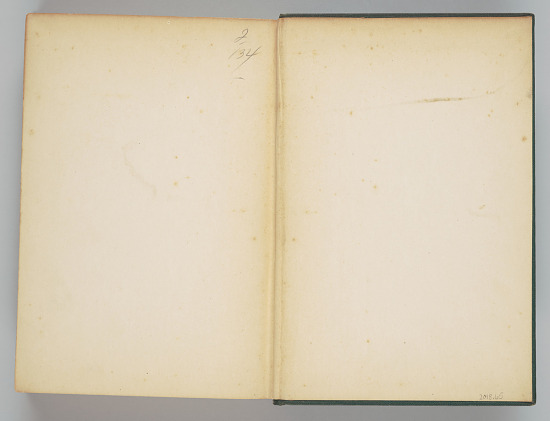 A first edition of the novel Batouala by René Maran. The green hardcover book has gold lettering [BATOUALA / by / RENÉ / MARAN] in the top right corner. The interior of the book contains 207 pages of text. The back interior page has an inscription, by hand in pencil that reads: [2 /134]. The back of the cover is blank. The novel tells the story of Batoula, the leader, or mokoundji, of a small tribe of Bandas living in Gabon under French colonial rule during World War I. The book provides a study of Banda folklore and daily tribal life under an oppressive regime.
Medium: ink on paperDimensions: H x W x D: 7 5/8 × 5 1/4 × 1 3/8 in. (19.4 × 13.3 × 3.5 cm)Object number: 2018.65Credit Line: Collection of the Smithsonian National Museum of African American History and CulturePublished by: Thomas Seltzer Inc., 1919 - 1926Written by: René Maran, French Guyanese, 1887 - 1960Caption: Batouala paints a stunning portrait of the lives of an African tribe and the detrimental effects of the French regime on the tribe’s society. When René Maran, a French-Guyanese poet and novelist, published his debut novel, Batouala, in 1921, he did so with the intention of criticizing the French regime and their presence in Africa, but its effects were far more profound than expected. He would become the first novelist of African descent to be awarded the French Prix Goncourt, which at the time was the highest literary honor that a French author could receive. Various French critics expressed outrage about his award. Most expressed frustration with the idea that Maran was a black man challenging the status quo.
Data Source: National Museum of African American History and Culture