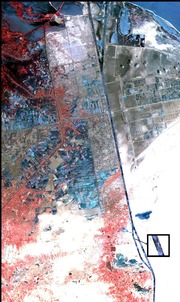 Aster Zooms In On Suez Canal : Image Of The Day

This 36 km by 60 km (22 by 37 mile) image shows the northern part of the Suez Canal, Egypt, with the Mediterranean Sea just visible in the upper right corner. This scene was acquired by the Japanese Advanced Spaceborne Thermal Emission and Reflection Radiometer (ASTER), flying aboard NASA's terra.nasa.gov Terra spacecraft, on May 19, 2000. Strategically and economically one of the most important waterways in the world, the Suez Canal runs north to south across the Isthmus of Suez in northeastern Egypt. It connects the Mediterranean Sea with the Gulf of Suez, an arm of the Red Sea. The artificial canal provides an important shortcut for ships operating between both European and American ports, and ports located in southern Asia, eastern Africa, and Oceania. With a length of about 195 kilometers (about 121 miles) and a minimum channel width of 60 meters (197 feet), the Suez Canal is able to accommodate ships as large as 150,000 tons fully loaded. Because no locks interrupt traffic on this sea level waterway, the transit time only averages about 15 hours. The enlarged inset image shows the only ship using this part of the canal at the time of this particular ASTER overpass. For more information, visit the asterweb.jpl.nasa.gov ASTER Home Page .