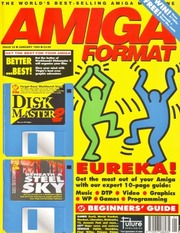 Amiga Format was a British computer magazine for Amiga computers, published by Future plc. The magazine lasted 136 issues from 1989 to 2000. The magazine was formed when, in the wake of selling ACE to EMAP, Future split the dual-format title ST/Amiga Format into two separate publications (the other being ST Format). At the height of its success the magazines sold over 170,000 copies per month, topping 200,000 with its most successful ever issue. Amiga Format can be thought of the ""mother"" or ""big sister"" magazine of Amiga Power, which it both predated and outlived. Whereas Amiga Power was strictly games-only, Amiga Format covered all aspects of Amiga computers, both hardware and software, both application and gaming uses. A further spin-off was Amiga Shopper, which dealt purely with the hardware and ""serious"" software side of the Amiga scene. The magazine offered various multi-issue tutorials on different application software, such as C programming or LightWave graphics rendering. The last tutorial was cut short in the middle because of the cancellation of the magazine. Amiga Format pioneered the concept of putting complete application software on a magazine coverdisk as a response to a moratorium on complete games titles being cover-mounted."