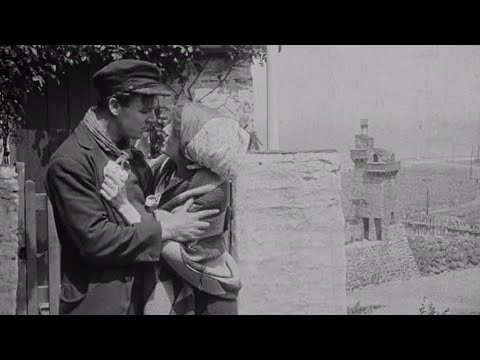 Fa parte degli Orphan Works del British Film Institute
Durata: 2 min.
This tantalising fragment offers just a glimpse of an early two-reel (20-minute) drama made by George Pearson| who became an important feature film director in the 1920s but whose films are almost all tragically lost. The well-photographed surviving scene was shot on location in Devon| and seems to show a mid-point of the plot| which concerned rival suitors| a Londoner and a local sailor. The sailor is played by Percy Moran| better known as Lieutenant Daring in a popular adventure series of the period. In 2014| a copy of George Pearson's Love| Life and Laughter - one of the 75 titles in the BFI's 2010 'Most Wanted' list of missing British films - was found in an a small Dutch town. This video is part of the Orphan Works collection. When the rights-holder for a film cannot be found| that film is classified as an Orphan Work. Find out more about Orphan Works: http://ec.europa.eu/internal_market/copyright/orphan_works/index_en.htm. This is in line with the EU Orphan Works Directive of 2012. The results of our search for the rights holder of this film can be found in the EU Orphan Works Database: https://euipo.europa.eu/ohimportal/en/web/observatory/orphan-works-database Subscribe: http://bit.ly/subscribetotheBFI.