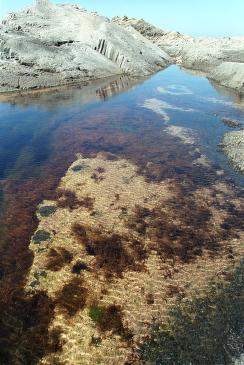 This photograph is from a collection entitled ""The Russian Far East in Modern Photography,"" which documents several regions of the Russian Far East at the beginning of the 21st century. The Russian Far East encompasses a large geographical area that borders the Pacific Ocean and stretches from the Chukotka Autonomous Okrug in the northeast to Primorsky Krai in the southeast, along the borders with China and North Korea. The collection includes several photographs by the famed researcher and photographer Vitalii Aleksandrovich Nikolaenko (1938-2003), who spent more than 30 years observing and studying the brown bears of the Kamchatka Peninsula and was eventually killed by a bear while carrying out his work. Also included are photographs of Sakhalin Island by Moscow-based photographer Aleksandr Vladimirovich Sorin, of Kamchatka and the Kuril Islands by Aleksandr Mikhailovich Bermant, of Primorsky Krai by Vladimir Mikhailovich Kobzar', and of Kamchatka by Irina Vladimirovna Stakhanova. The photographs depict the varied natural landscapes of the Russian Far East, including the geysers and volcanoes of Kamchatka and the coastlines of Russia's Pacific islands. The collection also captures the work of the region's fishermen, daily life and recreation in its settlements, and its wildlife, including Kamchatka bears and Amur tigers. The collection was gathered for the Meeting of Frontiers digital library project in the early 2000s."