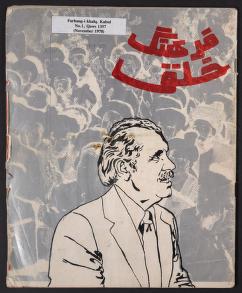 Farhang-i Khalq (Culture of the people) was a bimonthly publication devoted to the vernacular languages and cultures of Afghanistan. The word khalq (people) is traditionally associated with leftist politics in Afghanistan and the title can also be read as ""Culture of the Masses."" Its first issue was published in the late fall of 1978, after the Saur Revolution that brought to power the People's Democratic Party of Afghanistan on April 28 of that year. The magazine contained essays on regional dialects, traditional proverbs, and cultural minorities such as the Baloch and the Nuristani people. Included as well were more theoretical essays on the history and significance of vernacular languages and cultures in general. The articles were written in Pushto and Persian (Dari), with a roughly equal number of each. The revolutionary outlook of the publication can be seen in various ways, such as by the line drawing of Nur Muhammad Taraki (1917-79), the leader of the Saur Revolution, on its first cover. The magazine was presented to its readers as one of a series of efforts to promote the vernacular cultures of Afghanistan. It credited the earlier efforts of publications in the Uzbek, Turkmen, and Balochi languages. The first issue contains as well a dedication by Muhammad Bariq Shafi'i, an author and journalist who was a founding member of the People's Democratic Party of Afghanistan and served as minister of information and culture. He praises the wise leadership of Nur Muhammad Taraki, and calls on the intellectuals of Afghanistan to aid in promoting Farhang-i Khalq so that it can reach the hearts and minds of the working class in Afghanistan. World Digital Library. History and cultural issues of Afghanistan."