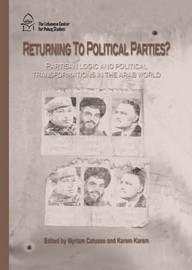 Are Arab parties facing a predicament? Are they paying the price of repression and limited pluralism? Have they become obsolete to the benefit of other political groups and mobilization modes such as communities, tribes, “asabiyyat” or to the disadvantage of non governmental organizations, associations and social movements? While some predicted “the end of parties” in the region as a result of authoritarian political systems, doesn’t the recent transition from the one party rule towards a fragile plural party system in many countries put again party organizations in the spotlight? Most of the time, contemporary Arab parties have little mobilizing power. Yet some are crawling out of underground activities and trying their hands at the exercise of power after years of oppositions. Others, and mainly on the Islamist arena, assert themselves as first hand mobilization structures, able in certain cases to compete with regimes in power. This book addresses those research questions. Emphasizing new and unpublished data, the book’s diverse contributions tackle holistically party life in six countries that have adopted very different political pathways: Yemen, Bahrain, Lebanon, Morocco, Algeria and Iraq. All the studies approach the decline or the revival of the parties from a long term historical perspective mainly with regard to political institutions in those six countries. The studies focus on the rules of party games, on the junction between “the right to politics” and “political rights”. They reveal the fine-tuning between ideological frameworks and political strategies. They raise questions about the renewal of elites, forms of militant activism, the array of parties’ political activities, particularly social ones. They examine the issue of identity construction and political solidarities in the framework of the nation state, or in contradiction with it. As a final point, the book inquires about how party life in those six countries accounts for political transformations: possible democratization of regimes, forms of domination that are played out within those regimes, the emergence of the breakdown of leaderships and finally the rationale behind mobilization and collective action. This book is published with the support of the program on Political Party Development in the Arab World (Algeria, Bahrain, Iraq, Lebanon, Morocco and Yemen) financed by the International Development Research Center (Ottawa, Canada).This publication gathers a series of studies undertaken within this framework. More studies are available on the project's website: www.appstudies.org The opinions expressed in this book are the responsibility of their authors and do not necessarily reflect the opinions of the Lebanese Center for Policy Studies or the International Development Research Center. The chapters in the book have been translated from French and Arabic to English by Nathanel London, Francoise Gillepsie, Nathalie Nahas, Angelique Baino, Jennifer Berry and Assaad Makary.