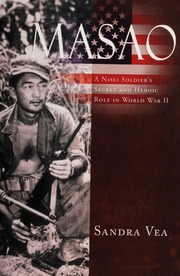 iv, 345 pages : 23 cm,Born in San Bernardino in 1916, Japanese-American Masao Abe was a typical American child. In 1924, his family traveled to Japan. Not knowing the language, other children called him 'chitai' - retard. He hated Japan and wanted to go home. His family returned to California without him, an eight-year-old American child left in a foreign country. Masao adapted, even succeeded and became a military officer in training. After five years, his parents rejoined him in Japan. But when Masao was 19, his father sent him back to California to live with an uncle who became a father-figure. Again, Masao found himself in a foreign country. He spoke limited English. Other Japanese-Americans viewed him as Kibei, not a polite term. He wanted to go home to Japan. In 1941, Masao was drafted in the U.S. Army and would eventually be recruited into the highly secret Military Intelligence Service. Unlike many other M.I.S. soldiers, Masao was deployed to the South Pacific where he fought on the ground, on the front line in three battles earning a Bronze Star and a Purple Heart. He faced an enemy that looked like him and survived the U.S. troops' mentality that 'the only good Jap is a dead Jap'. Meanwhile, his family struggled in Japan and his uncle in California was imprisoned. After the war, Masao was eager to get back to the States but was instead sent to Japan to serve in the occupation. The idea of home had eluded him since he was eight, but it was in Japan that he met his future wife, a fellow Japanese-American, and he found his home in her. Throughout the book, I intersperse anecdotes about the last years of Masao's life and from a personal point of view. He was a wonderful man with a unique and untold story,Includes bibliographical references (pages 339-343)