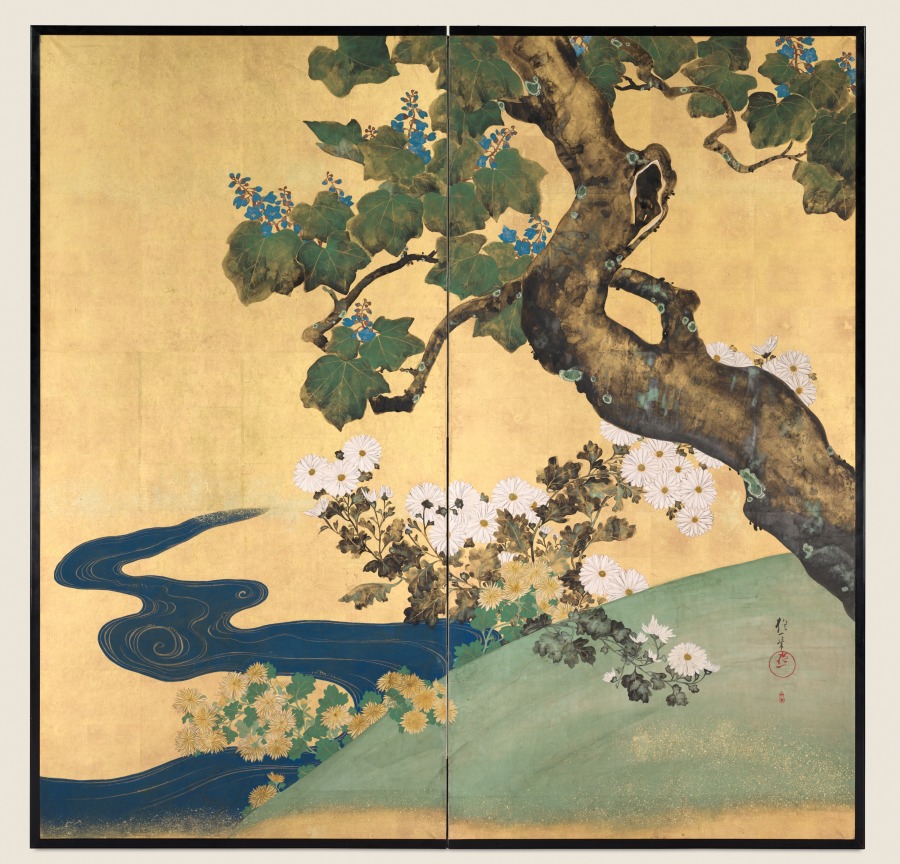 Oggetto: Painting
It is curious that although the existence of numerous two-fold byōbu (screen) in Japan and the West tells us of their popularity during the Edo period, few narrative paintings of the same era illustrate them. In depicting daily life in Kyoto or Edo, such genre scenes provide telling information about the customs, appearance, and behavior of those urban dwellers. In interior settings, particularly of the Yoshiwara (Edo's entertainment district), byōbu are shown being used within large rooms to create more intimate areas for guests and hosts. Yet among the two-fold screens that one can see illustrated, beginning in the latter seventeenth century, Rinpa compositions, like this example, are difficult to locate. Invariably Chinese-style ink paintings and/or calligraphic panels are portrayed, thereby identifying the prevailing taste of the entertainment house owners and their customers. Hōitsu, the son of a prominent daimyō family west of present-day Osaka in Himeji, was well educated and essentially unburdened by financial or political responsibilities. He studied literature and painting in his youth, embracing both monochromatic ink and highly colorful, realistic Chinese-style painting in his studies, as well as Japanese ukiyo-e (subjects of everyday life) formulations. Thus as a colorist he was well disposed toward his initial encounter with Kōrin's works in the Kyoto collections he visited around 1800. In fact, recording and studying Kōrin's powerful, highly sophisticated compositions became Hōitsu's life pursuit as he continued to paint, altering his style completely in an effort to produce Kōrin-style (Rinpa) paintings. By 1815, Hōitsu's art historical work enabled him to print a catalogue of Kōrin's oeuvre. This compilation allows modern researchers to attribute works more accurately to both the master and his followers, such as Hōitsu, who produced compositions based upon its illustrations. Hōitsu's compositions tend to conform to two patterns well associated with Kōrin's oeuvre: ink paintings often done with a modified tarashikomi (diffused ink) technique, and brilliantly colorful, daringly spare paintings set against gold or silver surfaces. Here the artist has settled on a brash, tightly focused, and gently abridged combination of familiar landscape elements whose presence is heightened by sparse setting and dramatic alignments. This latter feature offers viewers an insight into one of Hōitsu's contributions to later Rinpa painting traditions.
Fonte: Paulownias and Chrysanthemums, late 1700s-early 1800s. Sakai Hoitsu (Japanese, 1761-1828). Two-fold screen; ink and color on gilded paper; image: 152.7 x 154.9 cm (60 1/8 x 61 in.); overall: 157.5 x 158.5 cm (62 x 62 3/8 in.). The Cleveland Museum of Art, Gift of the American Foundation for the Maud E. and Warren H. Corning Botanical Collection 1964.386