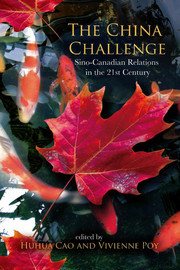 With the exception of Canada’s relationship with the United States, Canada’s relationship with China will likely be its most significant foreign connection in the twenty-first century. As China’s role in world politics becomes more central, understanding China becomes essential for Canadian policymakers and policy analysts in a variety of areas. Responding to this need, The China Challenge brings together perspectives from both Chinese and Canadian experts on the evolving Sino-Canadian relationship. It traces the history and looks into the future of Canada-China bilateral relations. It also examines how China has affected a number of Canadian foreign and domestic policy issues, including education, economics, immigration, labour and language. Recently, Canada-China relations have suffered from inadequate policymaking and misunderstandings on the part of both governments. Establishing a good dialogue with China must be a Canadian priority in order to build and maintain mutually beneficial relations with this emerging power, which will last into the future.