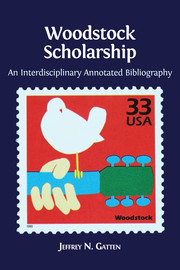 Since August 1969, the Woodstock Music and Art Fair looms large when recounting the history and impact of the baby boom generation and the societal upheavals of the Sixties. Scholars study the sociological, political, musical, and artistic impact of the event and use it as a cultural touchstone when exploring alternative perspectives or seeking clarity. This interdisciplinary annotated bibliography records the details of over 400 English-language resources on the Festival, including books, chapters, articles, websites, transcriptions and videos. Divided into six main subsections-Culture & Society, History, Biography, Music, Film, Arts & Literature-for ease of consultation Woodstock Scholarship sheds light on all facets of a key happening in our collective history. Throughout the 1960s, popular music became increasingly reflective and suggestive of the rising political and social consciousness of the youth culture. Examples can be seen in the development of the protest song genre within the folk music boom of the early Sixties and the marriage of lifestyle to music with fashion, followed by psychedelic music with the emerging drug culture. Woodstock was also where numerous facets of America during the turbulent Sixties coalesced, such as the Vietnam War and the Civil Rights and hippie movements. Thus Woodstock scholarship does not stand alone as field of study, but it is at the cross-road of a number of disciplines-music history, cultural studies, sociology, arts and literature, media studies, politics and economics. Providing full bibliographical details and concise, informative annotation for each entry, this book is an essential tool for students, scholars, teachers, and librarians in all these areas, as well as for anyone seeking a deeper understanding of both the Woodstock Music and Art Fair phenomenon and of the confluence of music, commerce and politics.