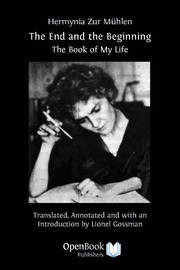 The End and the Beginning

First published in Germany in 1929, The End and the Beginning is a memoir of a rebellious young woman’s struggle to achieve independence. Born in 1883 into a wealthy aristocratic family of the old Austro-Hungarian Empire, Hermynia Zur Mühlen spent much of her childhood travelling in Europe and North Africa with her diplomat father. After five years on her German husband’s estate in czarist Russia she broke with both her family and her husband and set out on a precarious career as a professional writer. Because of her outspoken opposition to National Socialism, she had to flee her native Austria in 1938 and seek refuge in England, where she died, virtually penniless, in 1951. This revised and corrected translation of Zur Mühlen’s memoir – with extensive notes and an essay on the author by Lionel Gossman – will appeal especially to readers interested in women’s history, the Central European aristocratic world that came to an end with the First World War, and the culture and politics of the late nineteenth and early twentieth centuries.