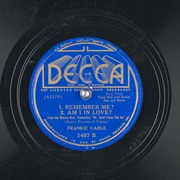 "Performer: Frankie Carle Writer: Al Dubin Fox Trot; Piano Solo with Guitar, Bass, and Drums; From the Warner Bros. Productions ""Mr. Dodd Takes The Air"". Digitized from a shellac record, at 78 revolutions per minute. Four stylii were used to transfer this record.They are 3.5mm truncated eliptical, 2.3mm truncated conical, 2.8mm truncated conical, 3.3mm truncated conical. These were recorded flat and then also equalized with Turnover: 375.0, Rolloff: -12.0. The preferred version suggested by an audio engineer at George Blood, L.P. is the equalized version recorded with the 3.5mm truncated eliptical stylus, and has been copied to have the more friendly filename. Matrix number: 62579A Catalog number: 1457 B Other IDs from the record include: (62579) The recording on the other side of this disc: 1. The Moon Got In My Eyes; 2. It's The Natural Thing To Do ."