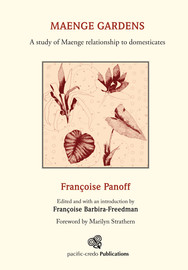 Domesticates play a central part both in the everyday and ritual life of the Maenge people of New Britain. Maenge relationship to this category of plants is here analysed through their horticultural techniques, their systems of classification and appellation, their utilisations and finally through myths and rites. Gardening techniques as well as the systems of classification and appellation emphasise the importance of the notion of cultivar in Maenge eyes. While the taxonomy of domesticates is relatively shallow, keys are built by taking into account minute differences between cultivars, as is shown with reference to taro and cordyline. As men may receive names of taro cultivars or give their own names to cultivated trees, the boundaries between nature and culture are suppressed: domesticates appear as part of humans’ culture, a point made even clearer by the attribution of a soul to cultigens since this soul endows them with powers similar to those of men: ability of feeling, agency. The distinction between hot and cold categories is fundamental for an understanding of Maenge medicine and gardening rites. The category of the rotten is also essential for a population of gardeners who fully recognise the part played by rotten matter in rebuilding the topsoil during the fallow period. Gardens, in the Maenge setting, thus appear not only as food reserves but as laboratories where experiments are ceaselessly going on as well as sanctuaries. Gardening provides not only social prestige but intellectual and aesthetic pleasures.