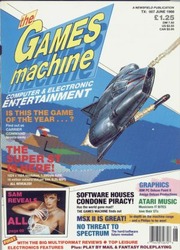 The Games Machine was a video game magazine that was published from 1987 until 1990 in the United Kingdom by Newsfield, which also published CRASH, Zzap!64, Amtix! and other magazines. The magazine ran head to head with Future's recently launched ACE and EMAP's long running C&VG magazines. Unhappy with the profits from the title Newsfield decided to call it a day for the title in 1990. However Newsfield would, more or less, continue with a multi format magazine with Raze. This new title would concentrate on the ever rising consoles like the Mega Drive as well as the established NES and Master System. In Italy there is a magazine of the same name which used to be the Italian translated version of the British magazine. However, the Italian version still publishes with original articles, and it is one of best selling magazine in Italy about PC games.