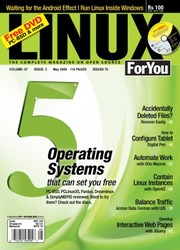 Linux for You Magazine

Open Source For You (OSFY) (Formerly Linux For You) is Asia's first publication about Linux and Open Source Software. This monthly magazine from India was launched in February 2003 by the EFY Enterprises Pvt. Ltd, which also publishes other magazines, such as Electronics For You. The magazine is also distributed in Singapore and Malaysia. OSFY has been identified as an important part of the FLOSS culture in India. Open Source for You's content ranges from introductory tutorials for new Linux users to programming for more advanced users. It includes reviews of utility tools, games and Linux distributions and as well as industry news. The magazine features colour content, lists of major Linux user groups in India and has featured interviews with prominent local and international open source developers. For example, Klaus Knopper, Paul W. Frields (Fedora project leader) and Greg Kroah-Hartman have all been interviewed in the magazine in the past.