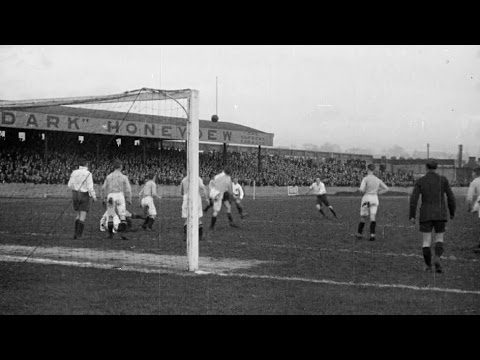 Fa parte degli Orphan Works del British Film Institute
Durata: 2 min.
1928-29 Irish Cup Semi-Final action between Ballymena and Coleraine| from Belfast's Windsor Park. Subscribe: http://bit.ly/subscribetotheBFI. Windsor Park| Belfast hosts the Irish Cup Semi-final| 9 February 1929. Ballymena| wearing the light shirts and white shorts| play Coleraine. The view of the intermittent steam trains and the church (possibly St Thomas' Parish Church) in the background of the action shows that this newsreel footage was shot from one half of the pitch only| from behind the goal defended by Coleraine. The film was shot by newsreel company Gaumont Graphic: the date of the match has been derived from the edition number appearing on the film's title page. This video is part of the Orphan Works collection. When the rights-holder for a film cannot be found| that film is classified as an Orphan Work. Find out more about Orphan Works: http://ec.europa.eu/internal_market/copyright/orphan_works/index_en.htm This is in line with the EU Orphan Works Directive of 2012. The results of our search for the rights holder of this film can be found in the EU Orphan Works Database: https://euipo.europa.eu/ohimportal/en/web/observatory/orphan-works-database