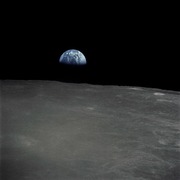 The Apollo 16 crew captured this Earthrise with a handheld Hasselblad camera during the second revolution of the moon. Identifiable craters seen on the moon include Saha, Wyld and Saenger. Much of the terrain seen here is never visible from the Earth, as the command module was passing onto what is known as the 'dark side' of the moon. Apollo 16 launched on April 16, 1972 and landed on the moon on April 20. The mission was commanded by John Young; Thomas K. Mattingly II was the command module pilot and Charles M. Duke, Jr. served as the lunar module pilot. Image Credit: NASA